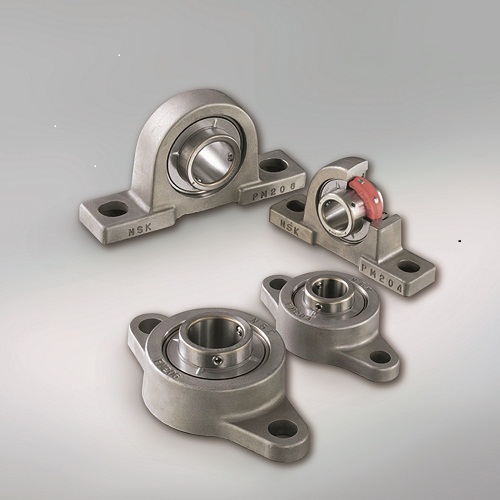 There are countless possible uses for Molded-Oil bearings (lubricated with NSK’s original oil-impregnated material) in all industry sectors. Operators can significantly increase their machinery’s service life by using these bearings, which are sealed for life.

A good example of this is in a case encountered by industry experts from the bearings manufacturer NSK at a food production company. The deep-groove ball bearings on a particular conveyor line failed repeatedly. The conveyor systems were regularly cleaned using a pressure washer for hygiene reasons. An assessment during ongoing operations showed that this was having an undesired side effect: damaging the bearings’ seals and washing out the lubricant. This in turn caused corrosion and damage to the rolling surfaces.

NSK identified this as a typical case for the use of Molded-Oil bearings. In these bearings, the lubricant is incorporated into a carrier made from polyolefin resin. Firstly, this prevents the lubricant from being washed out. Secondly, it guarantees long-term lubrication – in most cases lifelong lubrication – because the carrier gradually releases the incorporated lubricant. The third advantage is that this makes re-lubrication unnecessary.

Various series
The bearings have another advantage, which is highly valued in food production and other applications where hygiene is crucial. As the lubricant is embedded in the carrier and is only released slowly, the risk of leakage and product contamination caused by bearings is minimised. In addition to this, the bearings have low torque, which is advantageous in many applications.
NSK offers various types of bearings with Molded-Oil technology: deep-groove ball bearings, tapered roller bearings and spherical roller bearings. The range of deep-groove ball bearings also includes a series made from stainless steel. Corrosion-resistant Molded-Oil™ mounted units are also available. USDA H1-approved lubricants can be supplied for applications in the food industry.

Service life more than doubled
Tests show that conventional grease-lubricated bearings in applications with water exposure – e.g. in cleaning machinery – achieve a service life of approximately 500 hours. By contrast, Molded-Oil bearings were found to have an average life of 1,400 hours. Comparative tests focusing on the extreme scenario of underwater use reached similar findings. Conventional bearings managed to run for approximately 500 hours before failing; Molded-Oil bearings lasted for some 1,200 hours.

Food conveyor technology: annual savings of €70,000
In the case described at the beginning, the food producer took up the suggestion made by NSK’s consultants and initially replaced the conventional deep-groove ball bearings on one of the two conveyor lines with Molded-Oil bearings. As a result, downtime was dramatically reduced on this conveyor system. The bearings on the second line were then also changed. Since then, the user has been saving some €70,000 a year in costs associated with production downtime.
A confectionery manufacturer had a similar experience: production was repeatedly interrupted by conveyor systems failing due to problems with bearings. Here too, process water was penetrating the bearings and forming sugar crystals inside. An initial trial with Molded-Oil bearings was a success: there were no failures in 18 months. Following this, all the bearings in the conveyor machinery were replaced. The user now saves some €157,000 in bearing, maintenance and downtime costs every year.

Broad range of uses
The list of application examples from the food production industry is virtually endless. However, Molded-Oil bearings are not only ideal for use in the food industry. The same problems – bearing-related downtime caused by water penetrating the bearings and washing out the lubricant – also occur in paper manufacturing and cleaning machinery, for example. What is more, the use of incorporated lubricant does not only increase bearings’ service life when the failure is caused by water and moisture. The technology also solves problems caused by dust in the operating environment.
Also ideal for dusty environments

An example from the paper-processing industry illustrates this point well. The deep-groove ball bearings in a cutting and conveying machine had an average service life of just one week. These bearings were operated in an environment containing powdery dust and constantly had air flowing through them. This allowed dust from both paper and non-woven fabrics to enter the bearings and mix with the lubricant. A year after switching to Molded-Oil™ bearings, the plant still had not experienced any downtime.

Damp plus abrasive dust
The bearings used for a conveyor system in material handling were different yet again. In this case, the bearings failed frequently and were difficult to replace because they were located five metres above the ground. Specialists from NSK analysed the operating conditions and identified that the downtime was caused by water penetrating the components in conjunction with abrasive particles. Since switching to Molded-Oil bearings as suggested, the bearings have already lasted nine times as long as they used to.

Replacing conventional bearings with Molded-Oil technology is relatively inexpensive and often results in very substantial savings. A manufacturer of handbags frequently experienced downtime on some 40 dyeing machines used to dye the sides of shoulder straps. In some cases, the bearings in the conveyor and coating machines only lasted six weeks. The downtime generated costs of €624,000 a year. The failures were caused by dye penetrating the bearings virtually unhindered. Using Molded-Oil bearings therefore enables the manufacturer to make considerable savings.

A problem solver for many industries

This brief overview shows that NSK has developed a real problem solver for many different application scenarios with its Molded-Oil bearings. There are many more examples from very different sectors with a wide range of operating conditions. This shows how the technology can be used to great effect almost anywhere damp or dust could shorten the service life of conventional bearings. The handbag manufacturer with the leather dyeing machines mentioned above is not the only customer able to save five- or six-digit sums by minimising or eliminating downtime.